Mayor Pawlowski announces his re-election for Mayor at the IBEW Hall.

Mayor Ed Pawlowski will not face any opposition when voters in Allentown go to the polls on May 21st.  Pawlowski filed his petitions last week with over 480 signatures of registered Democrats supporting his re-election.  “I am glad to have the overwhelming support of the residents of Allentown,” said the Mayor.  “I will continue to work hard to make Allentown a better city to live, work and play.”

Pawlowski is seeking his third term as Mayor.  He points out that even though the City has made enormous strides in economic development which will soon bring numerous jobs to downtown, there is plenty of work that still needs to be done.  “We want to continue expanding this development to all neighborhoods surrounding downtown,” said Pawlowski.  “There still is a lot to accomplish and with the help of the voters my administration can continue to accomplish more great things in Allentown.” 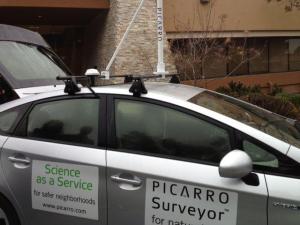 Picarro Surveyor drives down the road and it can tell you if there is a gas leak underground within 300 feet of the vehicle.

to define and develop a national mayors’ council, which will be open to Mayors around the country who are concerned about pipeline safety and the aging pipeline infrastructure in their cities.

Mayor Ruane was the first mayor Pawlowski reached out to when he decided to form a task force on Pipeline Safety which led to the organization of the Mayor’s Council on Pipeline Safety and this first meeting to discuss how cities can prevent the tragedies that both cities endured.  A September 2010 pipeline explosion and fire in San Bruno killed eight people, destroyed 38 homes, and badly damaged 70 more.    A February 2011 natural gas explosion in Allentown killed five people and destroyed eight homes.

“We will engage mayors across the country in a collaborative effort to define and develop pipeline safety protocol specific to our cities,” said Pawlowski.  “We will craft policy and position papers. We will disseminate initiatives that improve safety through engineering, damage prevention, land use, public education and community awareness, emergency response preparedness and a system of open communications between cities throughout the country.”

“We are creating this council to form a union of cities and to thereby facilitate shared education, ideas, conceptualizations and technology,” Pawlowski said.

During his visit, Pawlowski was able to see a demonstration of the Picarro Surveyor, and instrument that “finds leaks that no other technology in the world can find thus making utility networks safer,”  according to the manufacturer.  The device will “provide measurements that can create risk-based statistical models to help utility operators better assess the integrity of vast pipeline networks, and to use those models to prioritize pipe replacement,” according to the company, Picarro, which is based in Santa Clara, California.

The City of Allentown hopes to purchase a roll-off vehicle similar to this one with grant.

The City of Allentown has been awarded a grant of $240,977 for developing and implementing recycling programs by the Pennsylvania Department of Environmental Protection.  The city will use the grant money for its new cardboard baler at the Recycling Drop-off Center, to purchase new green and blue recycling bins, and partial funding for a new roll-off vehicle, like the one pictured above, to haul recyclables to their final destination.

Allentown was one of 131 municipalities and counties to receive the Section 902 recycling grants from the states DEP, receiving just under the maximum grant of $250,000.

“I believe that a greener city provides long term community and economic benefits,” said Mayor Ed Pawlowski. “We recently expanded our recycling program to include milk, juice and similar cartons and have held electronics and television recycling collections. Our residents and businesses have really embraced the idea of green living through waste reduction and recycling.”

According to DEP Secretary Mike Krancer, “Recycling plays a key role in improving Pennsylvania’s economy and protecting its environment. These grants further that cause, and DEP is proud to invest in local programs that help the awardees strengthen their recycling programs.”

Pennsylvania Act 101 mandates curbside recycling in the state’s larger municipalities (population over 10,000) and offers grants to be applied toward recycling program sustainability and enhancements.

“The grants we receive from the Pennsylvania Department of Environmental Protection for developing and implementing new programs and for actual recycling performance are very important to Allentown’s recycling programs and allow the city to continue to bring quality services and programs to our residents and businesses,” said Ann Saurman, Manager of the Bureau of Recycling and Solid Waste.

The latest Quinnipiac University poll on potential challengers to current Governor Tom Corbett, shows that if Mayor Ed Pawlowski were to run in the 2014 Pennsylvania Governor’s race, he would beat Governor Tom Corbett by at least six percent.   The poll asked likely voters, “If the election for Governor were being held today, and the candidates were Ed Pawlowski the Democrat and Tom Corbett the Republican, for whom would you vote?”  The answer: Pawlowski, 44 percent over Corbett, 38 percent.  Overall, Corbett’s popularity is slumping among the states’ residents.  Fifty-three percent of voters said the governor does not deserve reelection, to 35 percent who said he does.  Women disapprove of Corbett’s job performance 53 percent to 33 percent.  Pawlowski leads all Democratic contenders, except Joe Sestak, in support among women.

As the unemployment rate climbs while the nation’s falls, it is clear voters are looking for a new Governor, who knows how to help cities and towns grow jobs and create economic security.  Currently here in Allentown, there is over one billion dollars of new economic development and thousands of jobs being created as a result the creation of the Neighborhood Improvement Zone (the first of its kind in Pennsylvania) which received bipartisan support in both the state house and senate.

When asked about his potential run for Governor, Pawlowski said, “I am honored to be considered and I’m excited that this latest poll shows that the people of Pennsylvania view me as problem solver and would support me as their next Governor.  However, I am currently focused on serving the residents of Allentown as Mayor and continuing the great work that my administration has started.” 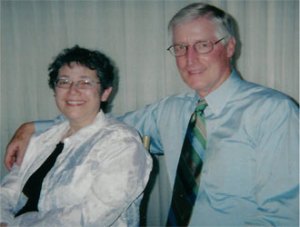 Charlie and Ruth Marcon, longtime philanthropists to the Allentown arts scene, are this year’s recipients of the 2013 Arts Ovation Special Recognition Award. The couple will be among those honored by the Allentown Arts Commission for their impact on the city’s cultural community at the commission’s 25th Annual Arts Ovation Awards luncheon at noon on May 2 at The Palace Center, 623 Hanover Ave., Allentown.

The Marcons of Allentown, both born and raised in the Lehigh Valley, have maintained a lifelong commitment to their community through numerous cultural and community development organizations. In the arts, alone, their generosity, sponsorship and volunteerism has extended to the Allentown Symphony Association, Community Music School, Allentown Art Museum, Civic Theatre of Allentown, Lehigh Valley Arts Council, Mayfair Festival of the Arts, and Allentown Public Library, along with valley colleges and universities.

“We greatly appreciate the dedication to the arts that Charlie and Ruth have demonstrated and they rightfully deserve this award,” said Mayor Pawlowski.  “We need more patrons of the arts like the Marcons.  I hope they inspire others to join our thriving arts community.  We need more volunteers like the Marcons.”

In 1988, former commission member Jeff Gordon had an idea to form an Arts Ovation Committee comprised of commission members and recognize the impact local artists and arts organizations were having on the Allentown community. The format was a luncheon which attracted some 400-plus guests from the local arts, school and corporate communities. Twenty-five years later, Arts Ovation still remains committed in its mission to recognize and encourage established as well as emerging artists who make the City of Allentown and the Lehigh Valley a place to call home.